Words and photos by Jeff Keenan

Through the carved out shores and around the most western point of Vancouver Island, we pass the division point of North and South island. Our boat, the Night Bite, set its bow pointing to the Island of Nootka. We pass jagged shorelines where the bays start cutting deeper into the thick forest-covered mountains and reefs jet out like fingers grasping to catch incoming swells. This is a special place; it is the birthplace of British Columbia, where Captain James Cook first set foot in BC to explore the northern coastline. The first nations named the land “Yoquot,” meaning, “where the wind blows from all directions.” It is not an area for the faint of heart—it is wild, and seemingly untouched.

Leaving Tofino on a crisp fall morning, we join up with the crew from Roark Revival and head north with the sun rising through the gaps in the mountains, the open ocean is rolling and calm as the eye can see. Northwest surf pioneer Raph Bruhwiler and his daughter Aqua, Ryan Cameron, Adam Chilton and I are off on a three-day trip up to the untouched wilderness, with surfing and fishing on the mind. As we pass through the Clayoquot Sound and the land begins pointing west, we head offshore to the banks and reefs that hold fish of plenty.

First stop is to fish for lingcod, our food for the trip. Ry and Raph have a wealth of knowledge in these parts, they are seasoned, to say the least. Both local Tofino boys have been raised on these waters, and as time passes, the shorelines and reefs have become tattooed in their memory banks. This is proven as soon as the first cast is made and Ry sets into a yelloweye rockfish. The next two casts bring up the lingcods. Within thirty minutes the food for the trip is set, and we are back on the move. 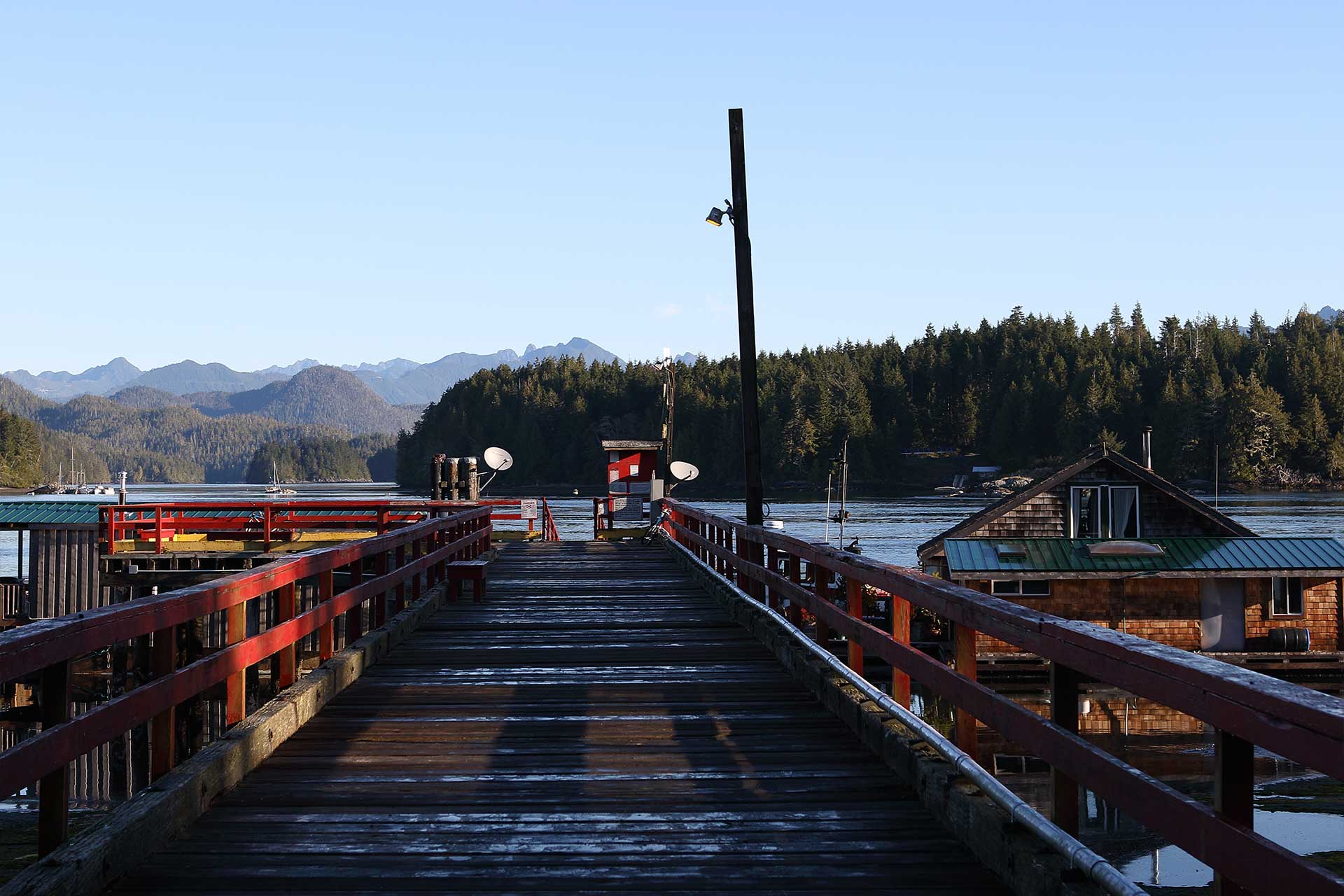 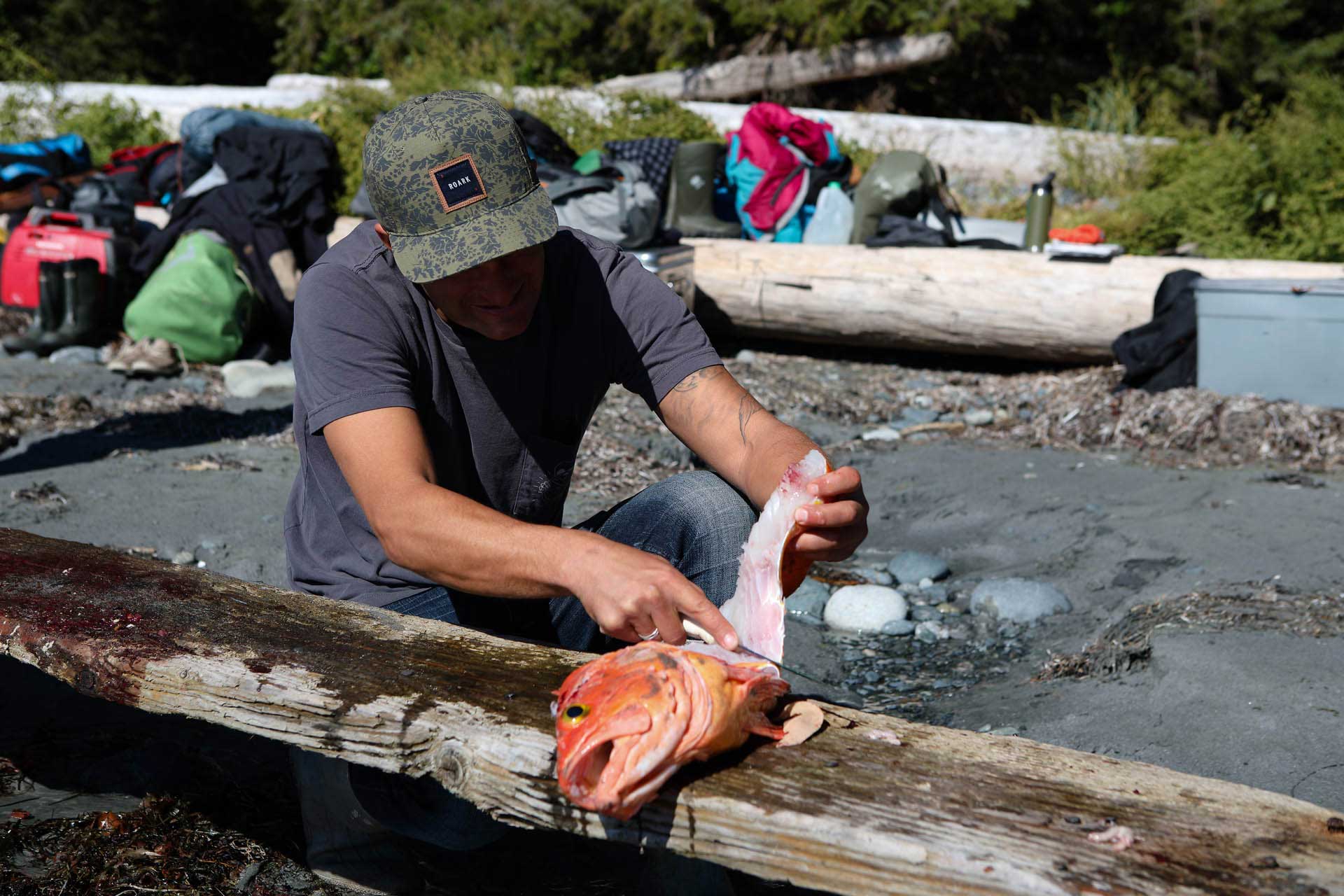 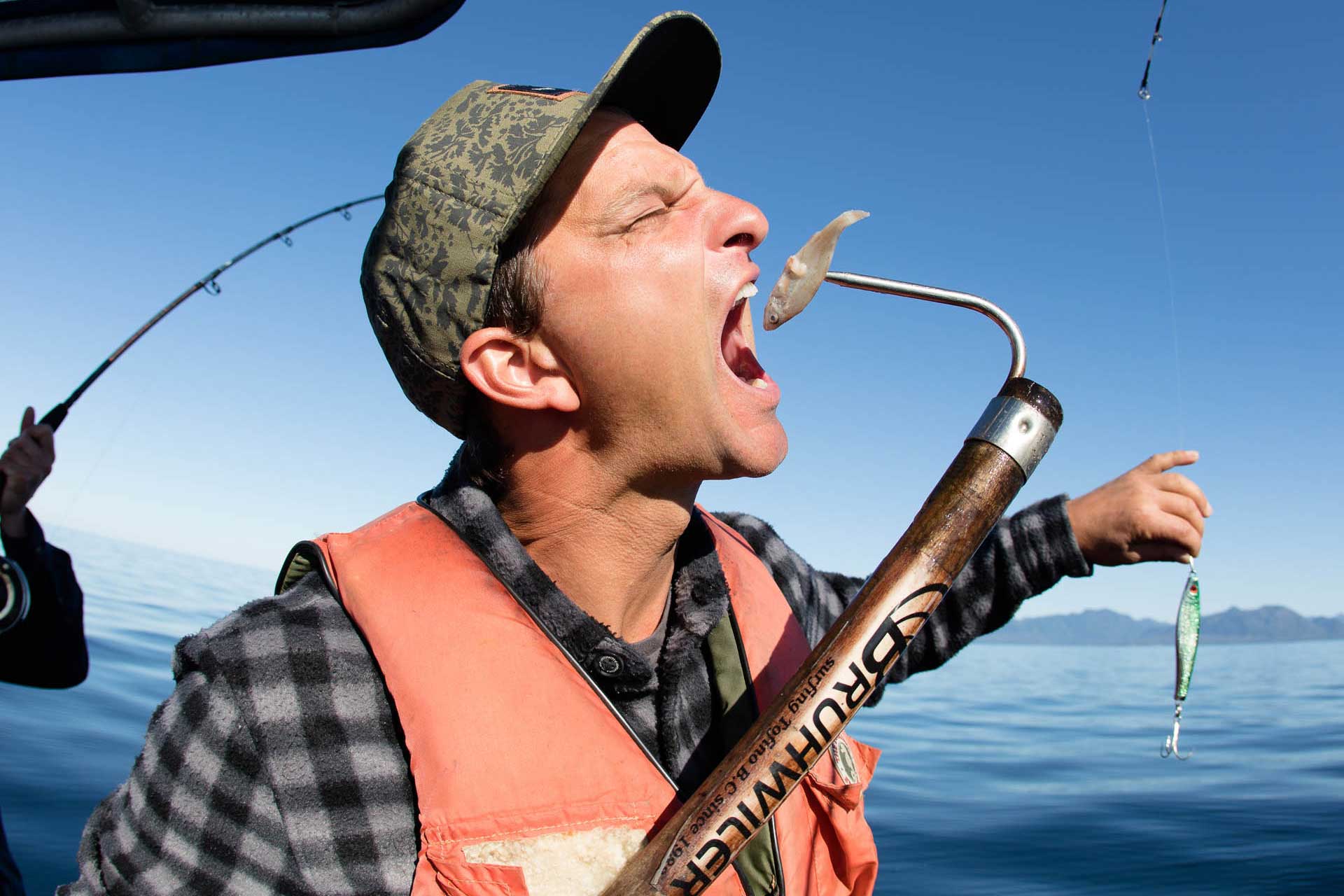 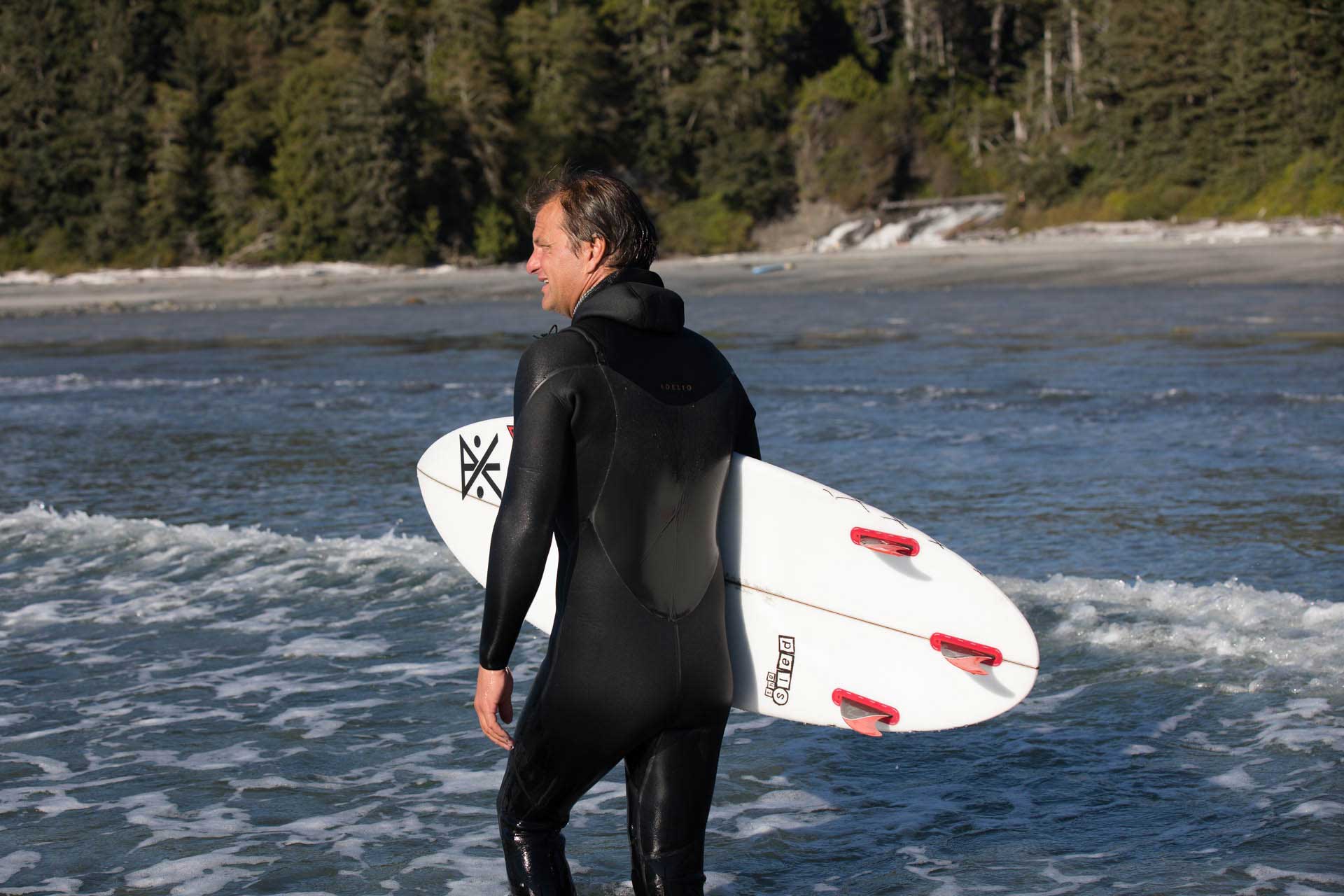 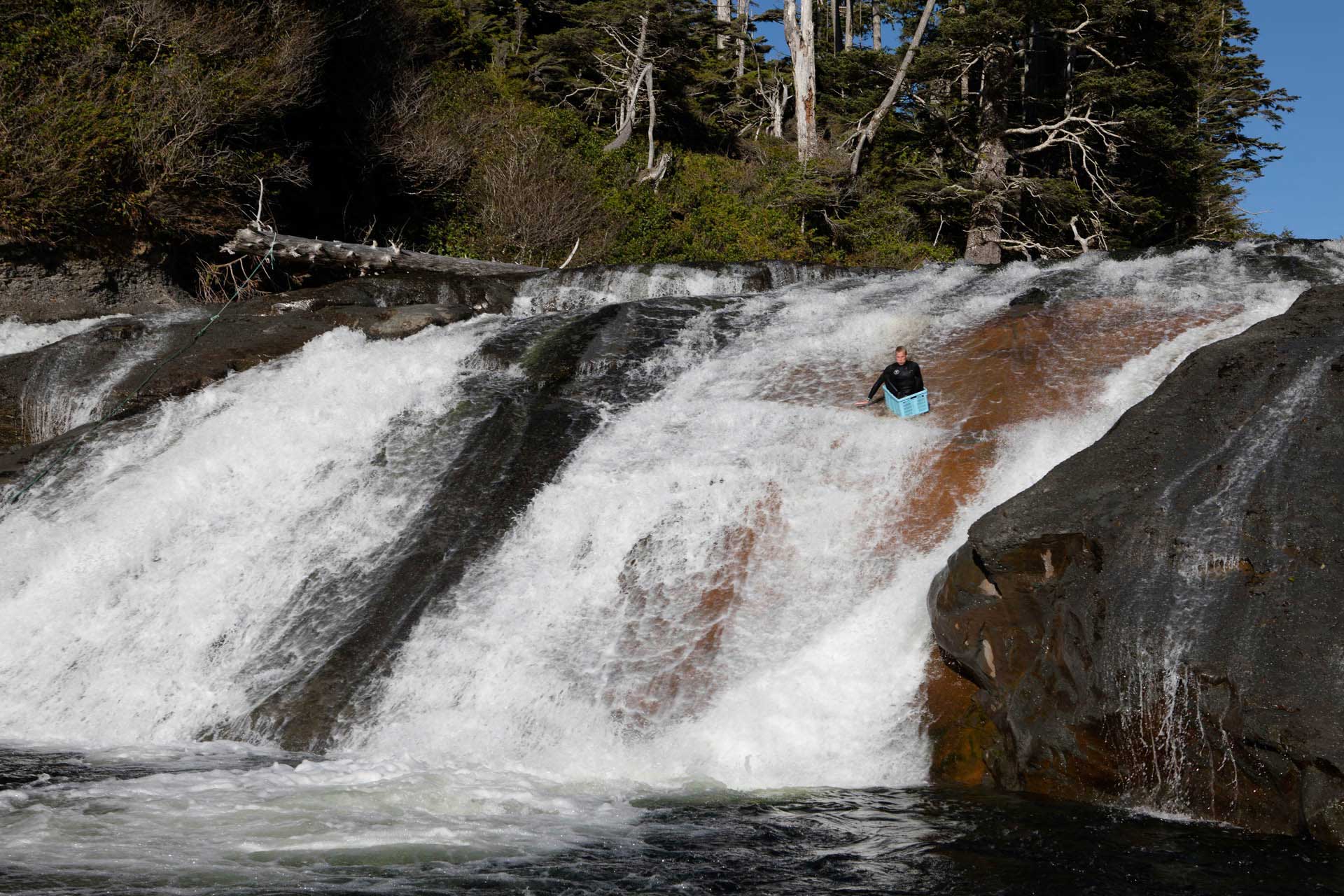 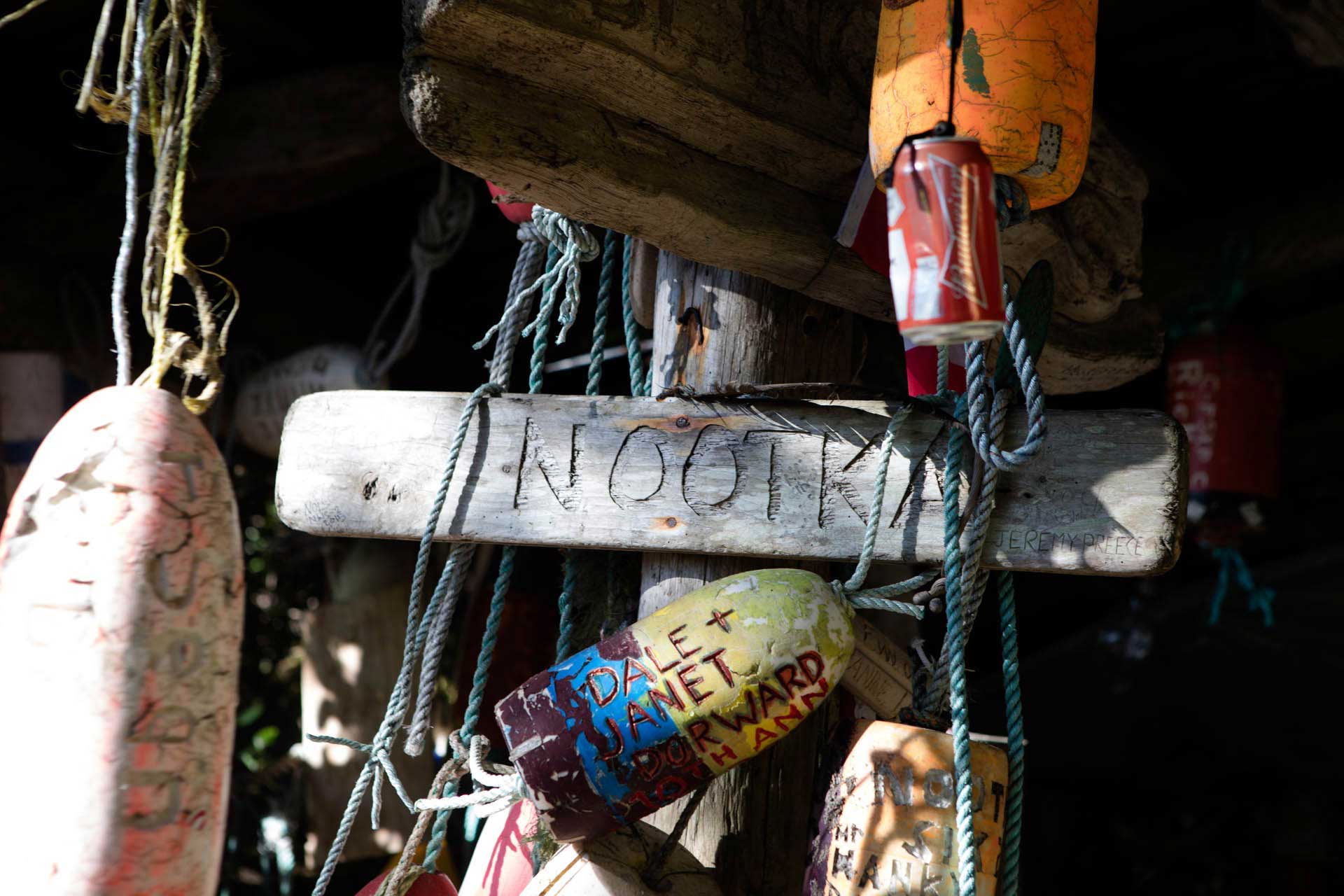 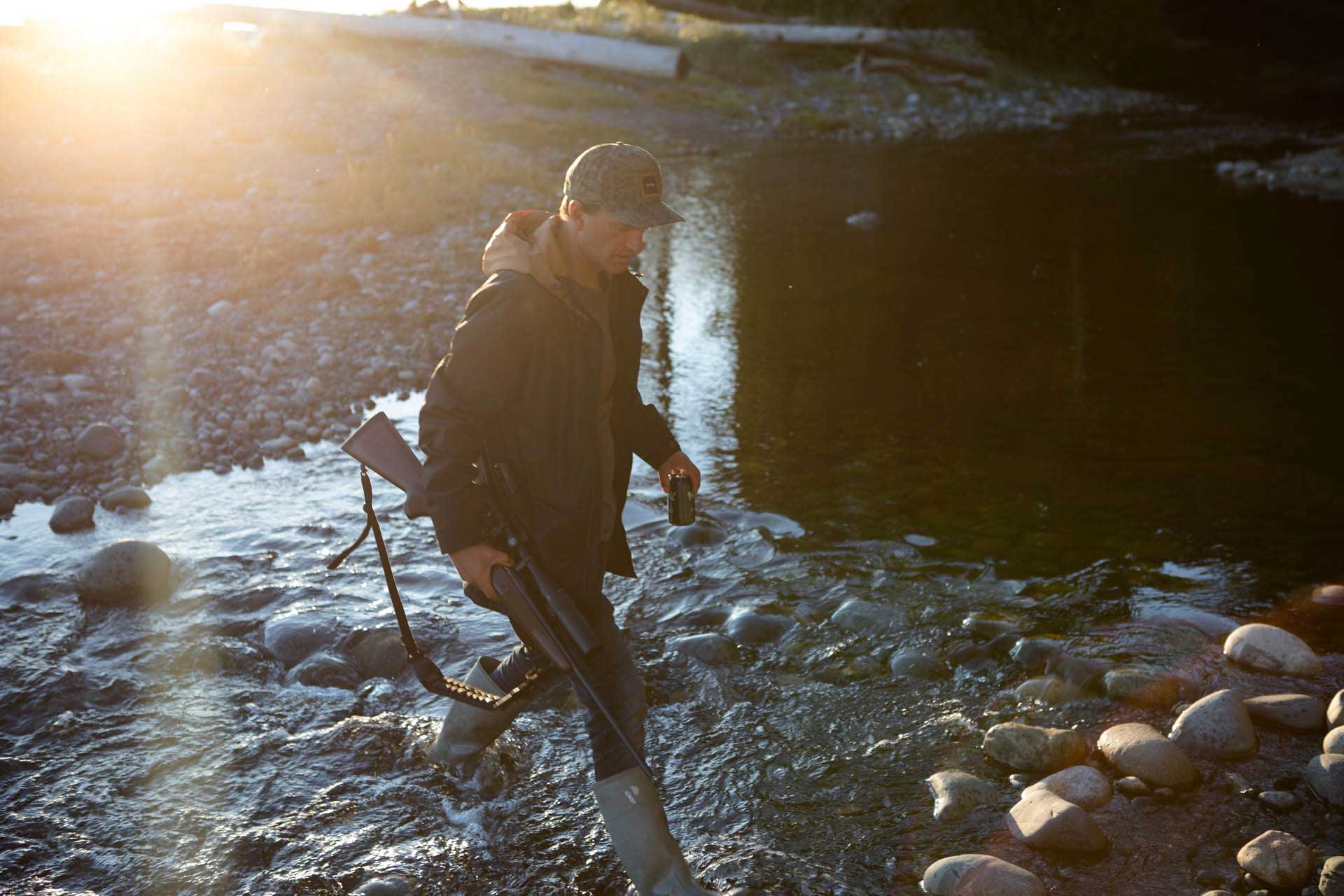 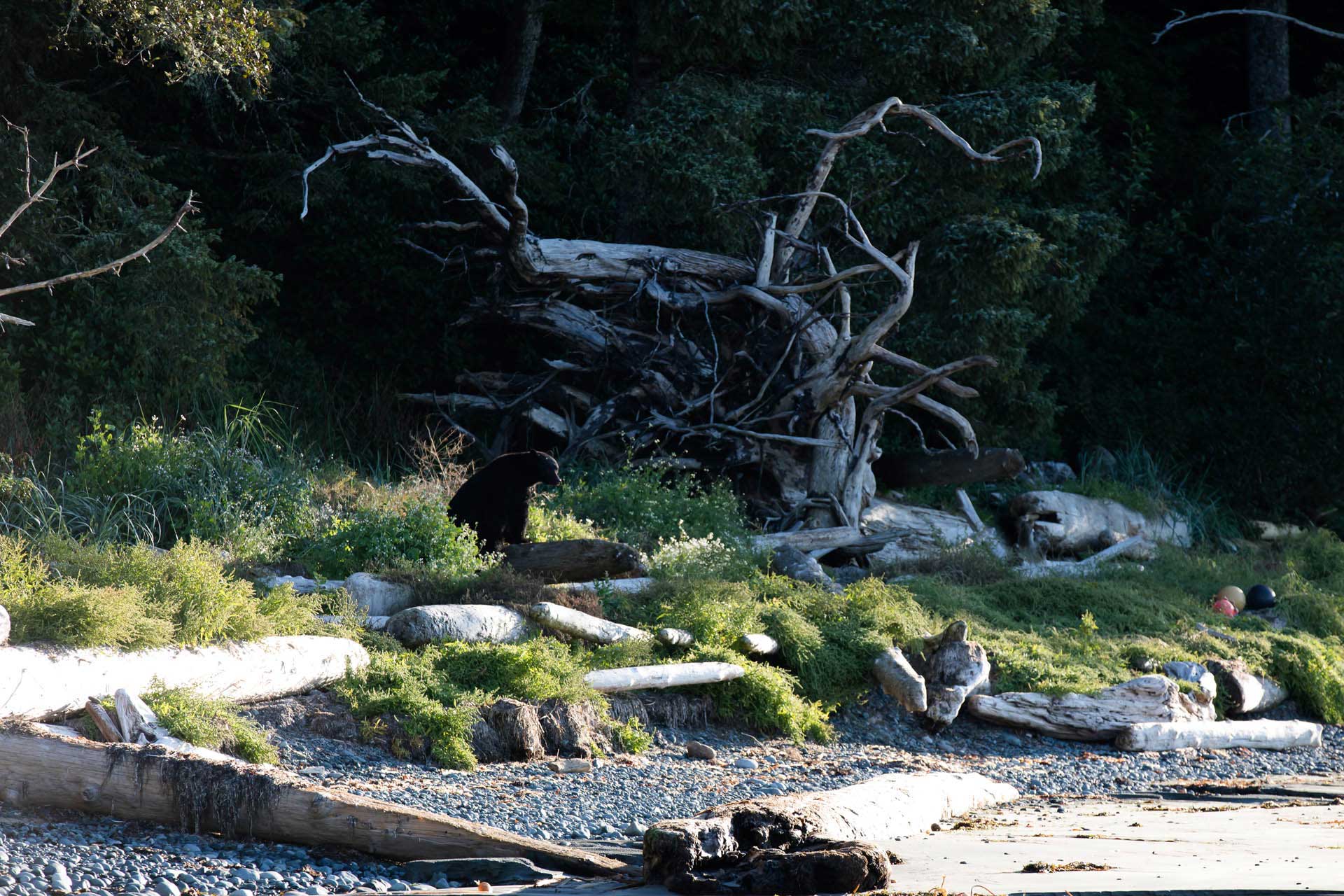 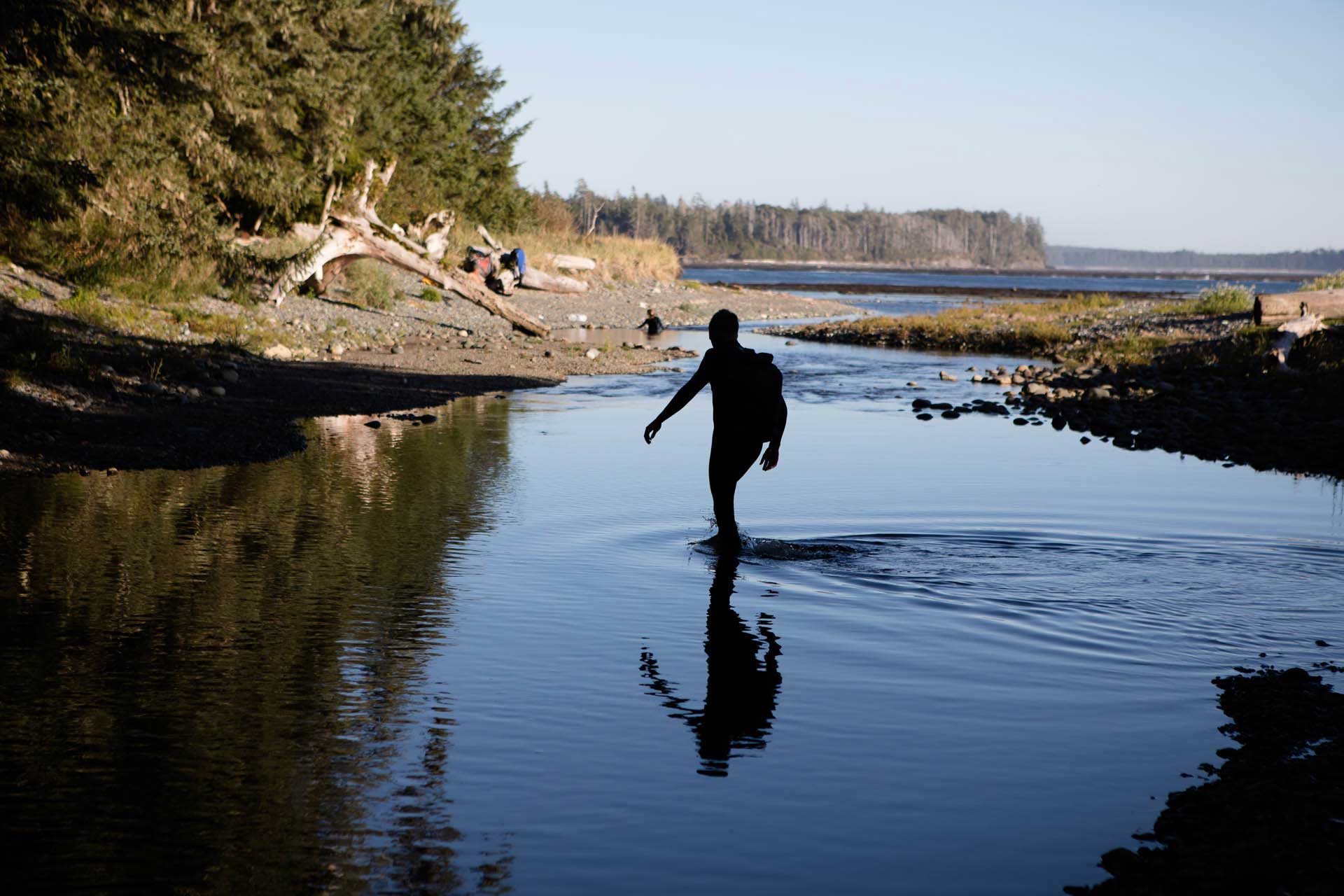 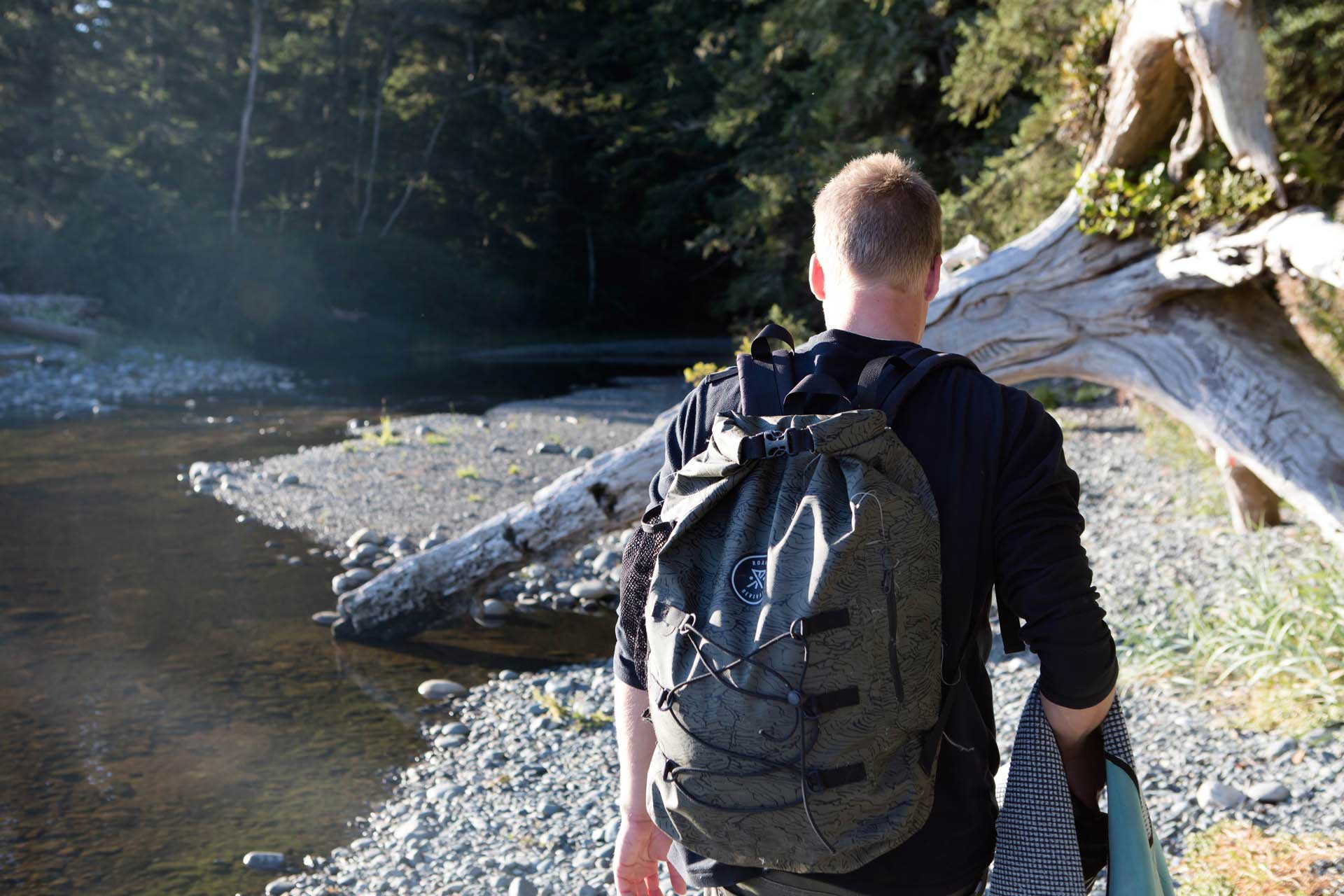 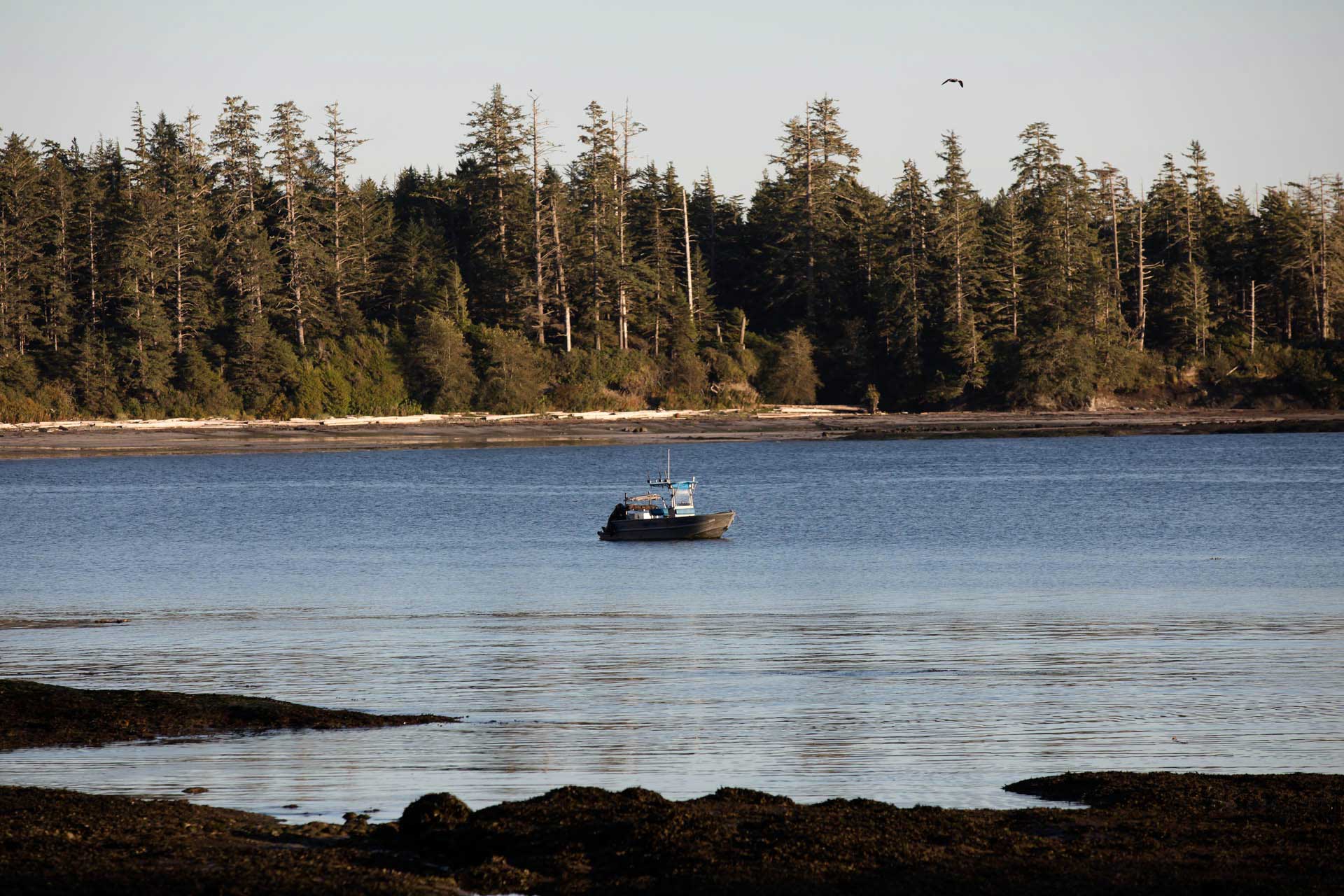 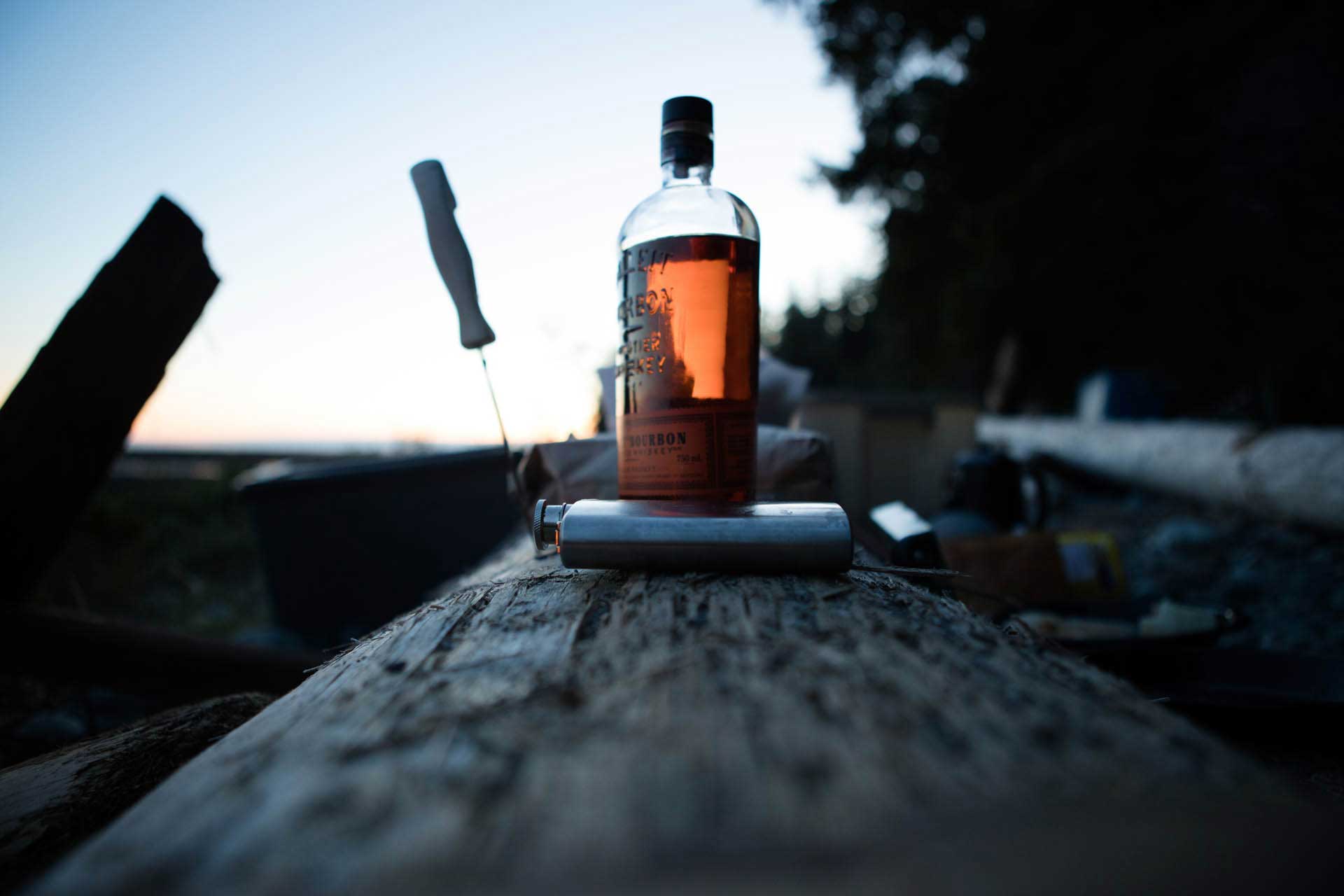 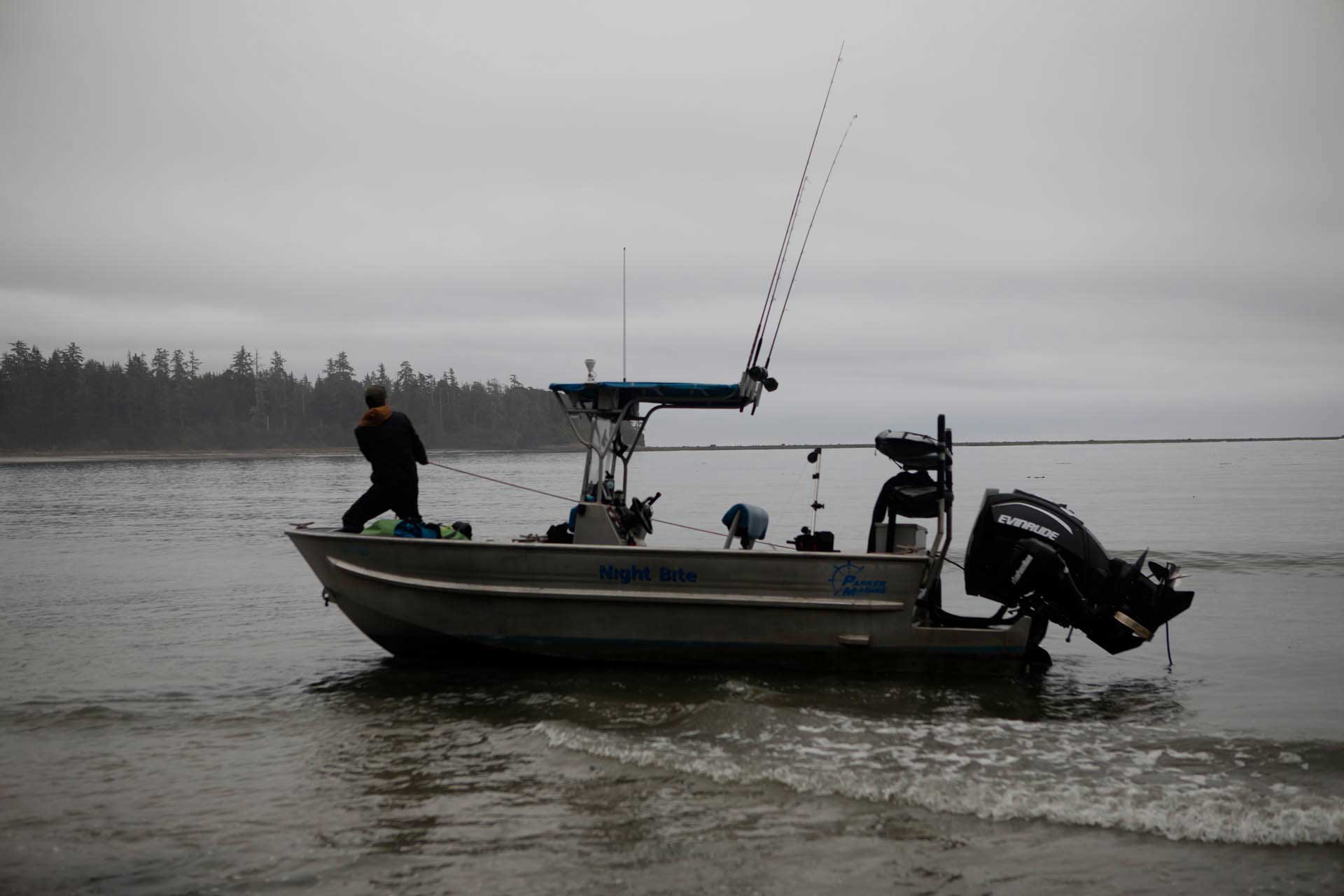 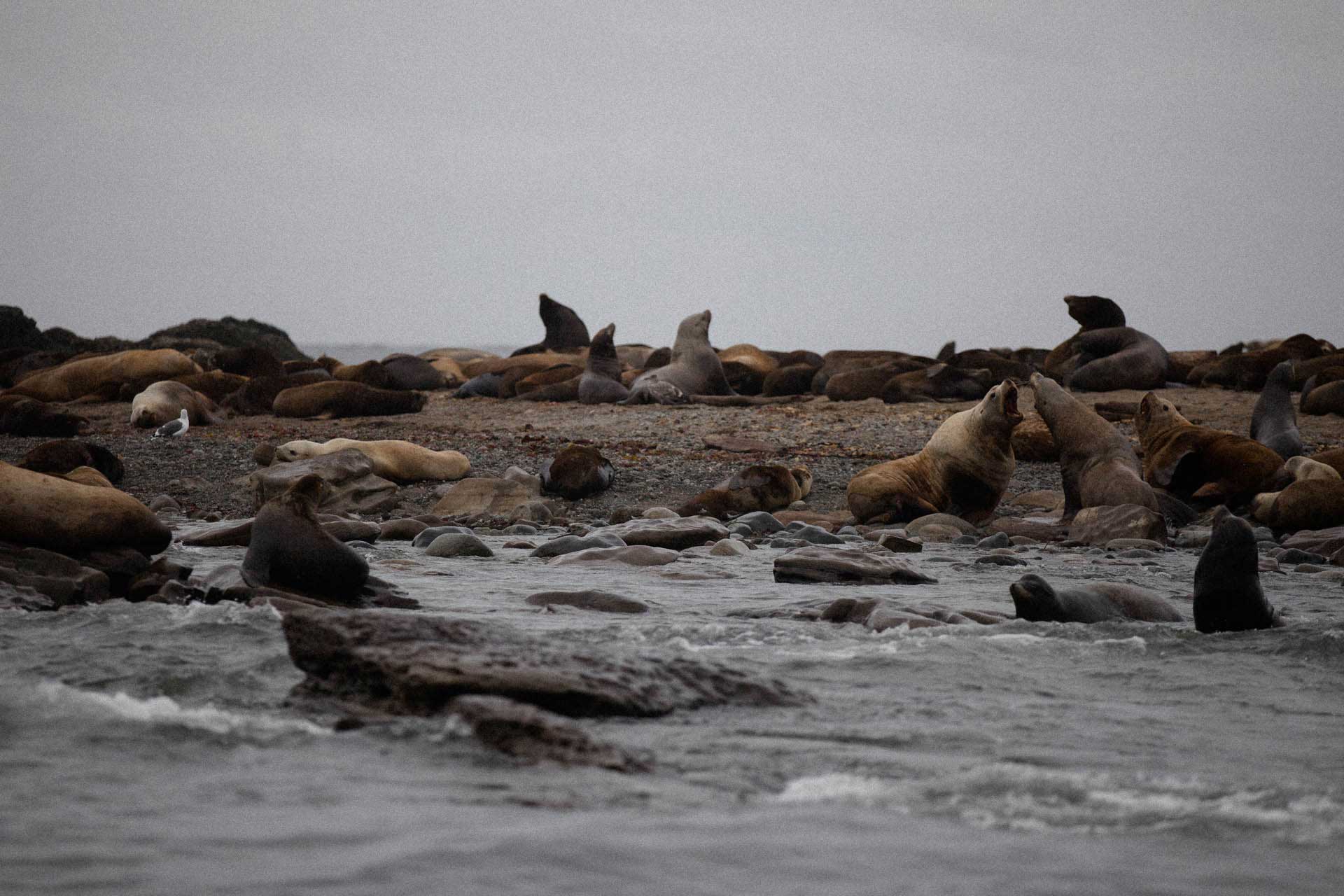 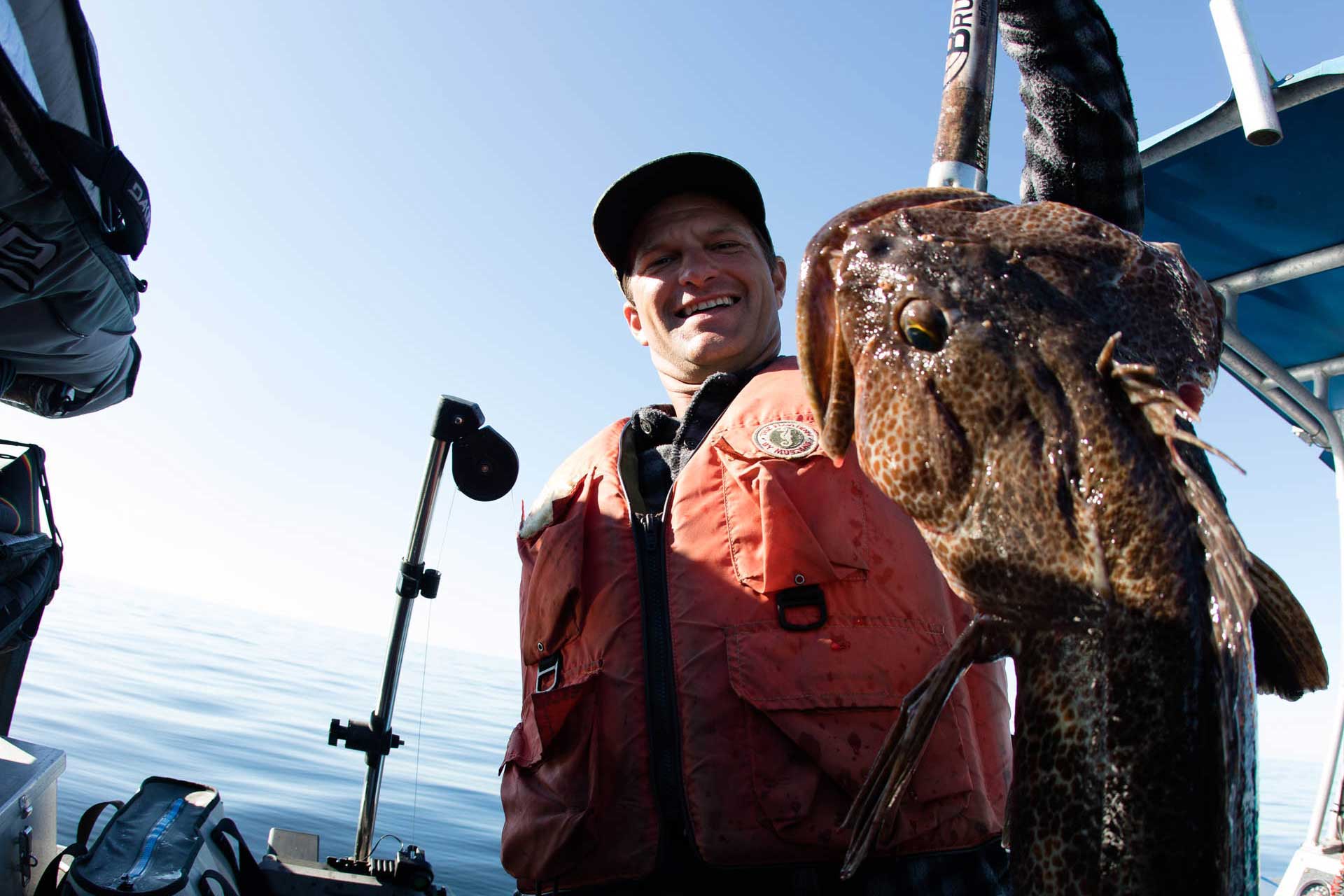 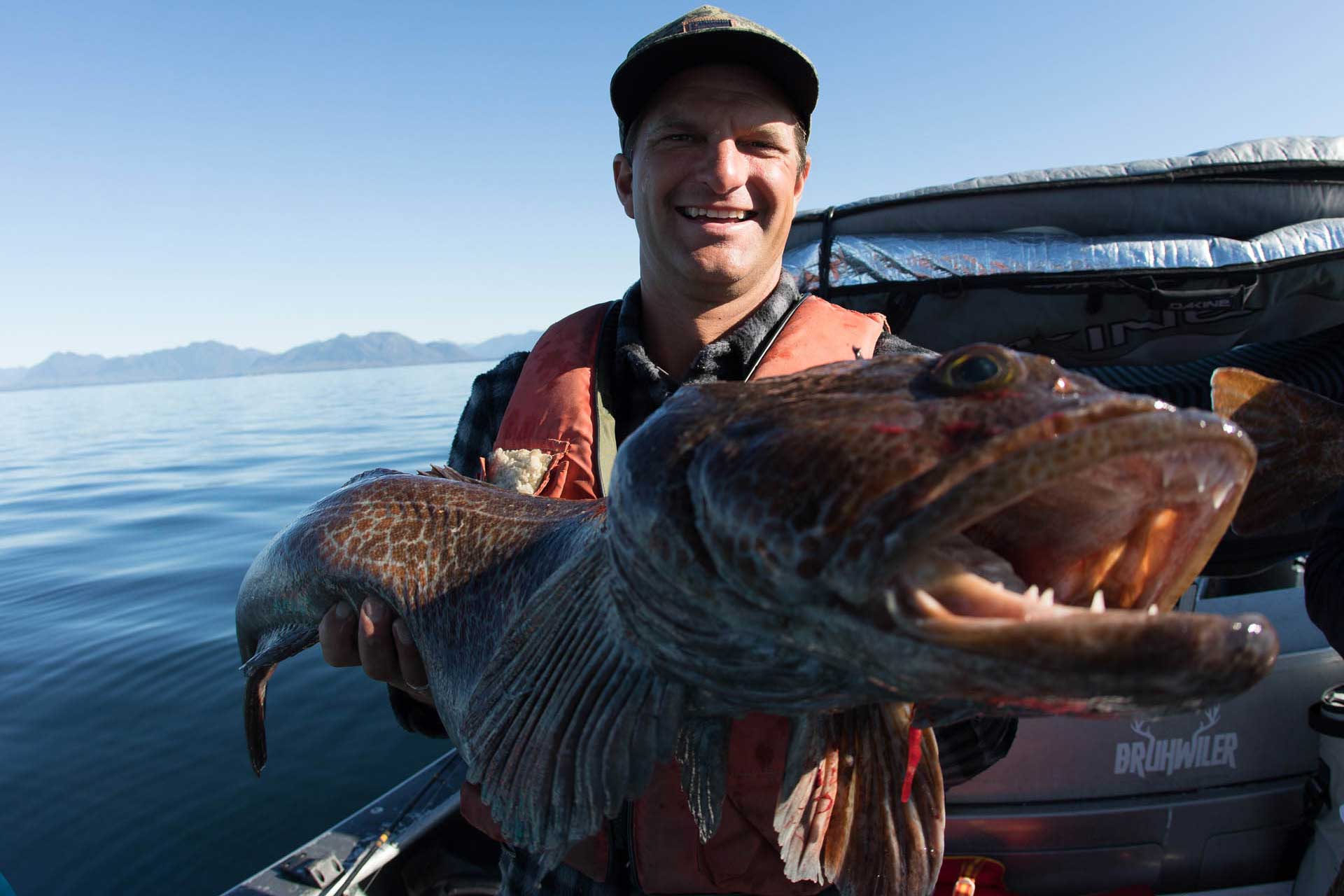 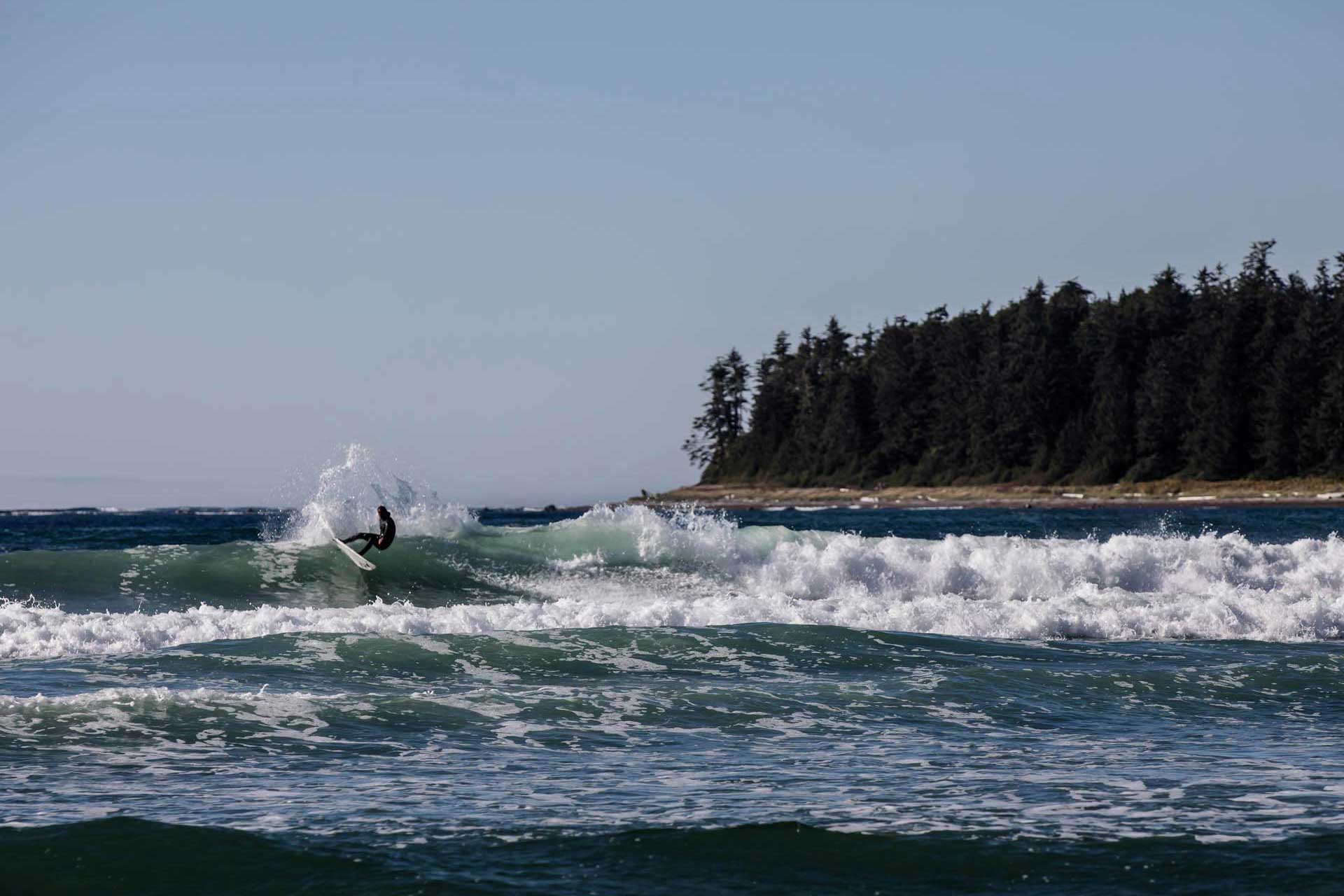 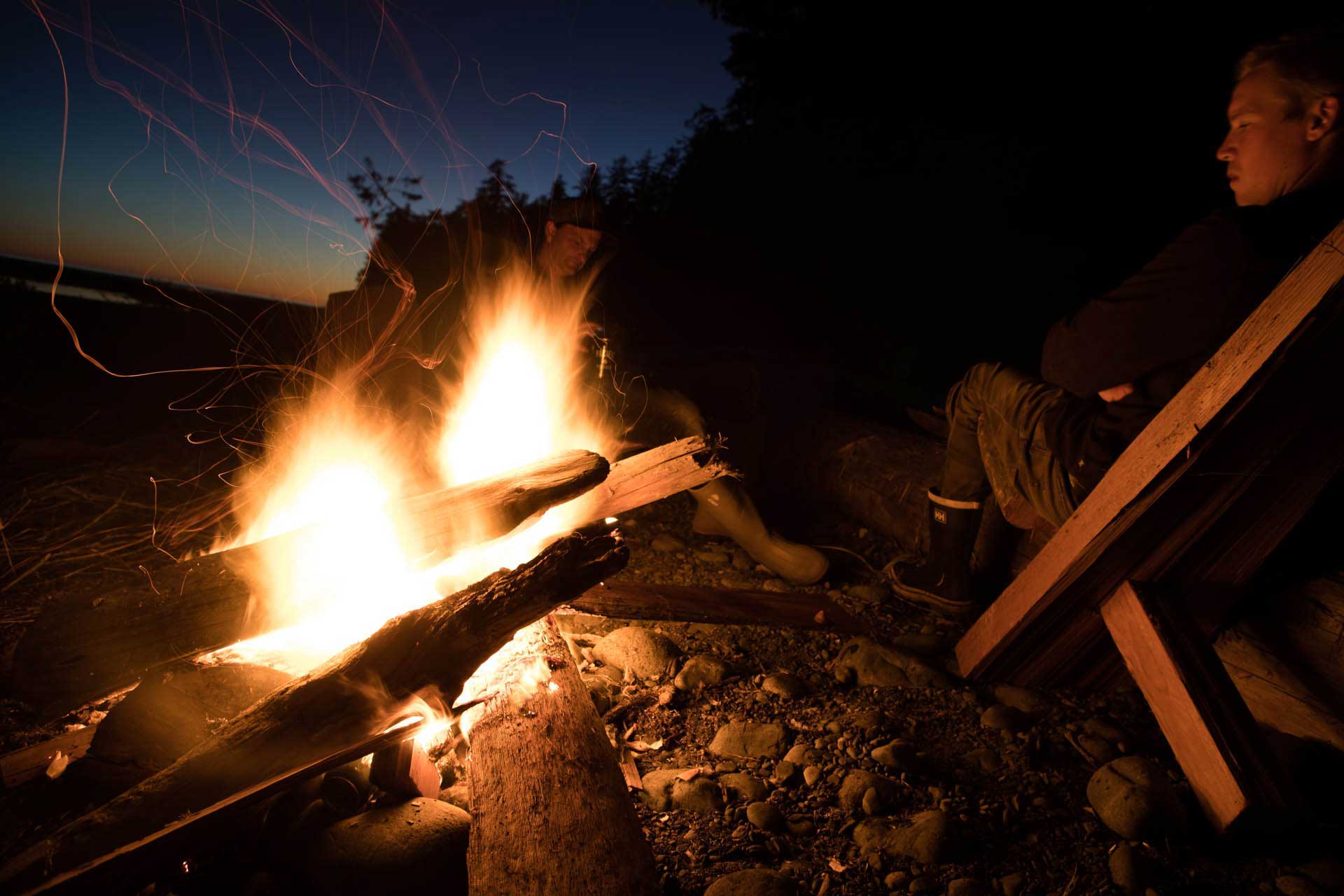 The anticipation builds as we head north and soon reach the main beach. But the slow rolls and smooth seas, mean only one thing… no waves. We attempt to surf on a sand bottom beach break with little luck. As a few sets come in, we look past the waves to the beach where a waterfall plunges from the mountains behind. Years of outflow have cut and scraped the rock smooth, creating a water slide that plunges into the fresh water pool below. We spend the next few hours ripping down the waterfall and exploring the beach. With wolf and bear prints littering the sand, it was our first sign that we are not totally alone on this island.

There is swell in the forecast so we decide to pick a safer bay to anchor and set up camp for the next few nights. After choosing a spot where a creek runs into a small pool on the beach, we set camp and start to fillet our prized catch. Ry breaks out the luxurious deep fry as Raph and Aqua create their special “Sharknado” sauce, a mixture of Mayo and Sriracha, for dipping. This will be our lunch and dinner for the next few days. As evening settles in we sit by the fire drinking beers and sipping whiskey. As Raph sits next to his rifle, we discuss the fish fry and the wolf and bear tracks we saw on the beach. As the beers start to drain, camp seems more inviting, and the warmth of the tents and sleeping bags begin calling.

The night is quiet and we are all sound asleep until we hear a large CRACK. Raph starts to yell. What seems like 5 minutes later, a shot rings out of the rifle and then another. A black bear has jumped out of the woods and right onto Raph’s tent, flattening it like a pancake. Luckily the shots scare the bear away. Raph and Aqua rig up their tent in the dead of night and fall back asleep. It happens that we had setup camp in one of the main watering holes for the local bear that lives on the beach. Over the next couple of nights he comes to visit our camp, but does not eat the food or make a mess. Warning shots will not keep him away.

As the trip goes on we surf and explore, with little sign of the swell, and we are convinced it will not arrive. We explore the coast looking at potential surf spots, then head back to camp to start in on an early night. We wake up on the third morning to rain on the tent and the noise of crashing waves close by. There is excitement to get up, but as we unzip the fly the first sight of the ocean is not what we imagined. The ocean is alive and upset. A mess. We quickly pack up camp and head south in search for a nook or cranny with a clean wave.

We scour the coast, hopping from one spot to the next. They are all either too messy, not the right angle or the tide is wrong. The ocean is not cooperating and the day is not looking good for surf. We pass the midway point, signaled by the island of thousand of sea lions. Our goal is to check one last zone. Raph hits the throttle and we pin it down to our last hope, in the distance the water is flatter and as we get close to shore there are no waves at all. We are busted and it is raining harder and the wind is blowing as the rain starts to come at us sideways. The thoughts of warm clothes, coffee and being home in front of the fire starts to overpower our minds.

As we take the inside passage home to the comforts of Tofino, everyone sits in silence reminiscing about the past few days full of adventure, content. It is hard to think it had only been three days that we set off on an adventure from where the road ends and the ocean begins. It was all a blur. We set our sights on something so grand but sometimes the most memorable adventures are the ones that don’t go as planned.

Visit our friends at wayward.com.